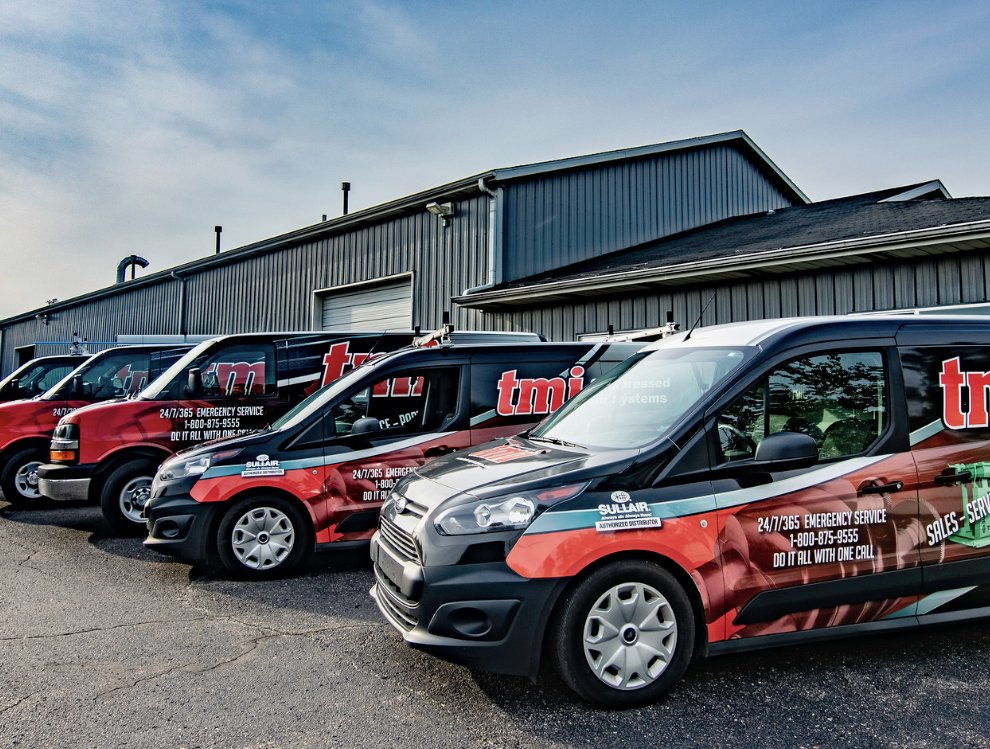 TMI (www.tmicompressors.com)is a West Michigan-based business that has offered a personal touch to compressed air system management since 1990. It is one of the most equipped compressed air management firms in the United States – an acclaim which allows it to continue to work with premium compressor brand lines and support prominent firms serving the manufacturing, healthcare, food and beverage sectors. Here, its co-owner, Charlie Sterken, explains how the latest tool in the firm’s box, AIRMATICSTM, is helping to take compressed air management into the 21st century.

What are TMI’s three primary reasons for using AIRMATICSTM?

Essentially, it’s to monitor the health of our customers’ compressed air systems, improve the efficiency of their setup and to be able to immediately react to any alerts that present themselves.

Any time that a manufacturer makes something, they generally need water, electricity, natural gas and, more often than not, the ‘fourth utility’ – compressed air. Typically speaking, our customers are excellent at manufacturing and production, but not as good at managing their compressed air, which is where we come in.

We leave no stone unturned, and part of our service involves handling scheduled maintenance. Prior to AIRMATICSTM, this was largely based on guesswork; we’d plan a service date in and then deal with any arising issues on or after that date. Or, we’d get a call from a customer on a Friday evening as a result of a warning light, which, after visiting the site, could often turn out to be a nuisance alarm and something that could have been dealt with on the following Monday.

Now, as a result of AIRMATICSTM, it’s like we have a service technician in our customers’ compressor rooms 24 hours a day, 7 days a week. We can see everything, every minute of the day, in real time.

Can you explain how you’ve incorporated AIRMATICSTM into TMI’s business model?

The world of compressed air is typically slow to capitalise on advancements in technology. Take IoT, for example. This technology has been seamlessly integrated into other sectors over recent years and, in many cases, it has revolutionised entire industries.

Thanks to AIRMATICSTM, which harnesses the power of IoT to deliver remote monitoring, we can now support manufacturers that need compressed air by remotely monitoring every single aspect of their system.

Importantly, unlike original equipment manufacturers, which only offer brand specific – or even compressor-specific – monitoring, AIRMATICSTM is brand agnostic. This means that regardless of what compressors our customers are running, irrespective of who they’re made by or how old they are, we can get a holistic overview of an entire system as opposed to just looking at individual compressors in isolation.

TMI has taken this all-seeing ability AIRMATICSTM affords and made it a subscription service. We charge a single quarterly fee for providing eyes on our customers’ system 24/7. This is made possible by installing AIRMATICSTMtechnology, which we own, at each one of our customer’s sites. They can access the data, too – and some really enjoy analysing it. Others are quite content taking a backseat knowing that we’re handling it for them.

Our mantra is ‘you worry about making your products, we’ll worry about your compressed air system’.

What has AIRMATICSTM allowed TMI to do that it couldn’t do before?

It’s allowed us to be in the compressor rooms of all our customers, all of the time. It’s also enabled us to really understand the behaviour of compressed air systems and spot trends, which, ultimately, means that we’re now in a position to deliver a much more proactive service, as opposed to reacting to a problem or simply dealing with routine maintenance at programmed intervals. In doing this, we can get the most out of our customers’ systems, prolong their assets’ lifespan and save them money by reducing their energy bill.

I’ll give you an example. About a month ago, we had a customer that had a vent open which was freezing the compressor here in our Michigan winter. We could see what was going on, remotely, from our offices as the data was painting an accurate picture. We were able to diagnose and address the problem before it became a major issue and led to the compressor being shutdown, which, as a manufacturer, is the worst possible scenario.

One of our customers, Federal-Mogul, the developer, manufacturer and supplier of products for automotive, commercial, aerospace, marine, rail and off-road vehicles, has a site in Greenville. Using AIRMATICSTM we discovered that the unloaded sump pressure was high, the variable speed drive was off and the master controller wasn’t working; three major issues that we fixed, saving them $10,000, and that would otherwise have only been picked up at the next service interval some two months away.

Another issue at the same company revealed that their water coolers were getting plugged up and that the oil temperature was trending higher and higher. Using intelligence gleaned via AIRMATICSTM, we were able to recommend changing out the coolers before the compressors shut down, a move that helped to avert a plant shutdown. Halting production in a facility this size would mean wasting thousands of dollars every minute in lost production.

What are your future plans for AIRMATICSTM?

Our industry is heading more and more towards IoT, and AIRMATICSTM represents a way in which companies such as ours can access and maximise the benefits of this technology. Of course, there are other solutions out there that work in a similar way, but none that are brand agnostic and that can offer the level of universality that AIRMATICSTM does.